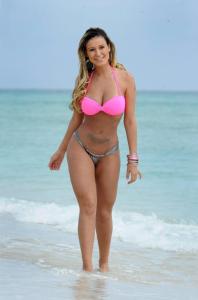 In an effort to obtain a more curvaceous figure Brazil’s Miss Bum Bum contestant, Andressa Urach, was hospitalized after a  botched thigh augmentation surgery.  According to the NY Daily News, Andressa Urach was getting hydrogel implants on  November 21st when she incurred an infection at the Conception Hospital in Porto Alegre. The 27-year-old is best known for the  size of her backside when she placed second in 2012 in the Miss Bum Bum competition. Ms. Urach is apparently in bad shape and in need of a breathing apparatus.Many women are getting thigh augmentation as a means to obtain a more hourglass  shape. Andressa’s mother, Marisete Favari stated ” I ask that everyone pray a lot. I’m sure my dear Jesus is wonderful and will cure  it” according to Brazilian News agency Globo.com. Andressa Urach is most famously known for having an alleged affair with Real  Madrid soccer star Cristiano Ronaldo in which he denies. She is also known for famously greeting the Portuguese player while naked  during his team’s practice at the World Cup in Brazil this summer. By the way she walked around wearing only body paint at World Cup. Wow, she got nerve!