Some people get a little fame and money and just don’t know how to act.  Remember Sophia’s mommy, Farrah Abraham from MTV’s Teen Mom?

We’re told Farrah was getting a new procedure, where the doctor puts an implant in the patients lip … which in theory is cost effective because you don’t have to maintain the work with fillers.

Farrah says she researched the doctor and the procedure and decided it was a safe bet. She was wrong.  She says the doctors injected her with an anesthetic before the procedure … and believes she had a MAJOR allergic reaction 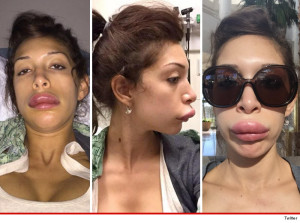